Barnett to Pursue Professional Football Career with Opportunity in Germany 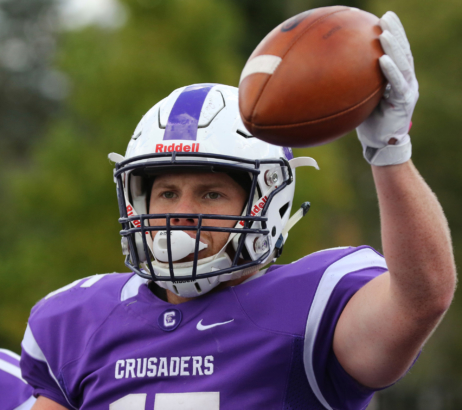 How many Division III schools can say they have someone playing in the pros?

Not many. But Capital is now one of them!

The lights have not been turned off on David Barnett, not yet anyway.

The record-setting wide receiver is looking to continue his football career, professionally. With his playing career for the Purple and White complete, David Barnett (Springfield, Ohio / Shawnee) has secured an opportunity to play in Regionalliga, a tiered professional American football organization under the umbrella of the German Football League, this summer.

Barnett, a four-time All-OAC selection and holder of two career Capital football records, has entered an agreement to suit up for the Ritterhude Badgers, located near Hamburg, Germany.

The process began prior to the start of his senior season. Barnett likened the process to join the league and the Badgers to the college recruiting process. A connection is made. The team staff will review film and make contact, if interested, and then information sharing begins until there is an offer and acceptance.

Barnett had options after receiving offers from teams in the Czech Republic, Sweden and Italy, to name a few. However, Barnett found the offer, honesty and transparency from Ritterhude head coach Benjamin “Benno” Crljenkovic most attractive to pursue. On February 8, he inked the deal that would grant him the opportunity to play professionally.

The German Football League (GFL) plays exclusively within the country but is one of many European leagues that play American football. The rules are nearly identical to what is played at the NCAA level and the competition is most comparable to high-level NCAA Division III play. Typically, imported Americans or European players beyond the German borders are the only players to be paid or receive additional accommodations for their play.

Much like international soccer, the GFL is designed as a relegation league. The GFL is built into three tiers: the GFL1, GFL2, and Regionalliga (from highest to lowest). Teams play their respective season and the winners of the bottom two divisions are advanced to the next highest tier the following year. The last place teams in the top two divisions are dropped down one tier.

Ritterhude is currently playing in the lowest of the three tiers but has spent time competing in the GFL2, previously. In 2015, Ritterhude won the North Division championship out of Regionalliga’s Northern region.

While Barnett’s highly-anticipated adventure has been put into question for summer 2020 with the global outbreak of the Coronavirus, the door is far from closed. The league is continuing its examination of the virus’ presence in and around Germany and has yet to make a decision to cancel or postpone the upcoming season. A decision should be delivered in mid-April regarding the 2020 campaign.

Even if the German Football League encounters the same fate as many professional and amateur sports leagues in the United States, Barnett is already fielding offers for the summer of 2021.

“For me, the goal is the same as it is over here,” said Barnett. “Just go out and compete and do what I do, to know that I am doing my best to help my team and that I can control what I can control. As long as I do that and not worry about what I can’t control, I think I am going to be alright.”